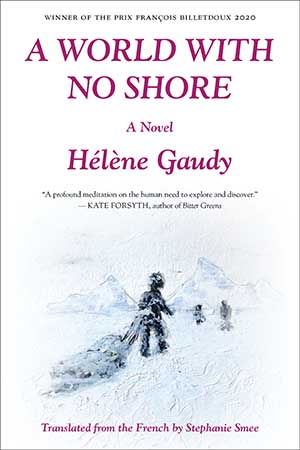 “Luminous. A writer you feel envious of. The beautiful prose weaves a net of wonder around you.”

“I thoroughly enjoyed this taut rumination on grief, memory and human connection. Hélène Gaudy’s exquisite prose will hook you from the very first line, and Stephanie Smee’s thoughtful translation perfectly captures the cold beauty of the Arctic regions. This book is a real gift.”

“Hélène Gaudy provides a profound and thought-provoking meditation on the human need to explore and discover, in a book that blurs the boundaries between history, fiction and reportage.”

A World with No Shore

Summer 1930, Svalbard, Norway. A walrus-hunting boat sets sail for White Island, one of the last lands before the North Pole. The melting ice has revealed terrain that is usually inaccessible. As they move across the island, the men discover bodies and the remains of a makeshift camp. It is the solution to a mystery that has hung in the air for 33 years: the disappearance in July 1897 of Salomon August Andrée, Knut Frænkel, and Nils Strindberg as they tried to reach the North Pole in a hydrogen balloon. Among the remains, some rolls of negatives are found and one hundred images are retrieved. Based on these lunar-like black-and-white photographs and the expedition logbooks, Hélène Gaudy retraces and reimagines this great adventure that was blown off course, weaving in the painfully beautiful love affair of Nils and Anna. From the conquest of the skies to the exploration of the Poles, this haunting, award-winning novel, set in the ethereal landscape of the Arctic, reflects on the human need to discover, describe, conquer, and ultimately shrink the world.

HÉLÈNE GAUDY lives in Paris. She was born in 1979, studied at L’École supérieure des arts décoratifs de Strasbourg, and joined a literary group that publishes as the Inculte collective. She is the author of six novels—most recently, Une île, une forteresse (2016)—and a dozen books for children.

STEPHANIE SMEE left a career in law to work as a literary translator. She recently translated Pascal Janovjak’s The Rome Zoo (2021).