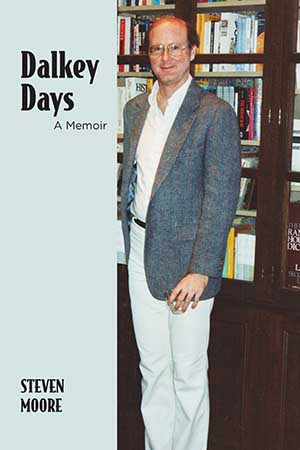 “Steven Moore has been at the vanguard of criticism and publication of outliers and explorers whose artistic visions reinvigorate the capacious form of the novel and the short story, and we are in his debt.”

Literary critic Steven Moore was an editor at Dalkey Archive Press during its early years (1988-1996) when it grew from a one-man operation to one of the most respected small presses in America. In part 1 of this brief memoir, he recounts how he joined the press, what he accomplished there, and why he left. This is followed by an annotated list of all the books Moore acquired, enlivened by behind-the-scene anecdotes, and concludes with short essays on certain particular authors. Dalkey Days is profusely illustrated with book covers, author photos, and rare Dalkey memorabilia.

STEVEN MOORE (PhD Rutgers, 1988) is the author of a two-volume survey entitled The Novel: An Alternative History, the second volume of which won the Christian Gauss Award for excellence in literary scholarship. He has written extensively on William Gaddis and other modern authors, and for years wrote book reviews for the Washington Post, Chicago Tribune, and other periodicals. His last two books—My Back Pages: Reviews and Essays and Alexander Theroux: A Fan’s Notes—were also published by Zerogram Press.